Welcome to the Book Vault! 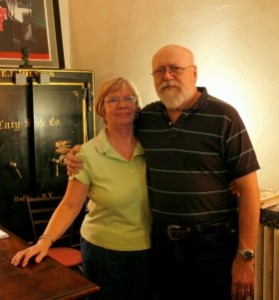 When Christine and I purchased the building at 46 Washington Ave. in October 2011, it was 2 stores separated by a wall. In an earlier incarnation, one side had been a jewelry store, and the owners had installed a large, approximately 3 ton safe. The previous owner stipulated that she was absolutely not responsible for removing the safe. After soliciting bids for the job we understood why, and finding that the lowest estimate was $2,000, we decided to make the best of the situation, decorate around the safe, and call the store “The Book Vault.”

It took about 3 1/2 months to rehab the building to the point that we could start planning the bookstore. We started with a pile of disassembled shelves and 1000 boxes of books in the middle of the floor. In the nearly six months until our opening in late June, Christine and I spent countless hours assembling shelving and categorizing, pricing, and sorting books. I am happy to say that those days are in the past. The current situation is shown in the pictures in the gallery.

Chris and I have tried to make the store an inviting place to come and relax, and to renew acquaintances with old friends like DAVID COPPERFIELD and and HAMLET and to discover new friends amid our thousands of used books in over 60 different categories. We have books on how to build a scale model steam tractor, romance novels, biographies, and books on every major religion.

So come on down, relax and stay awhile. We have free Wi-Fi!

We sell many categories of used & rare books including: